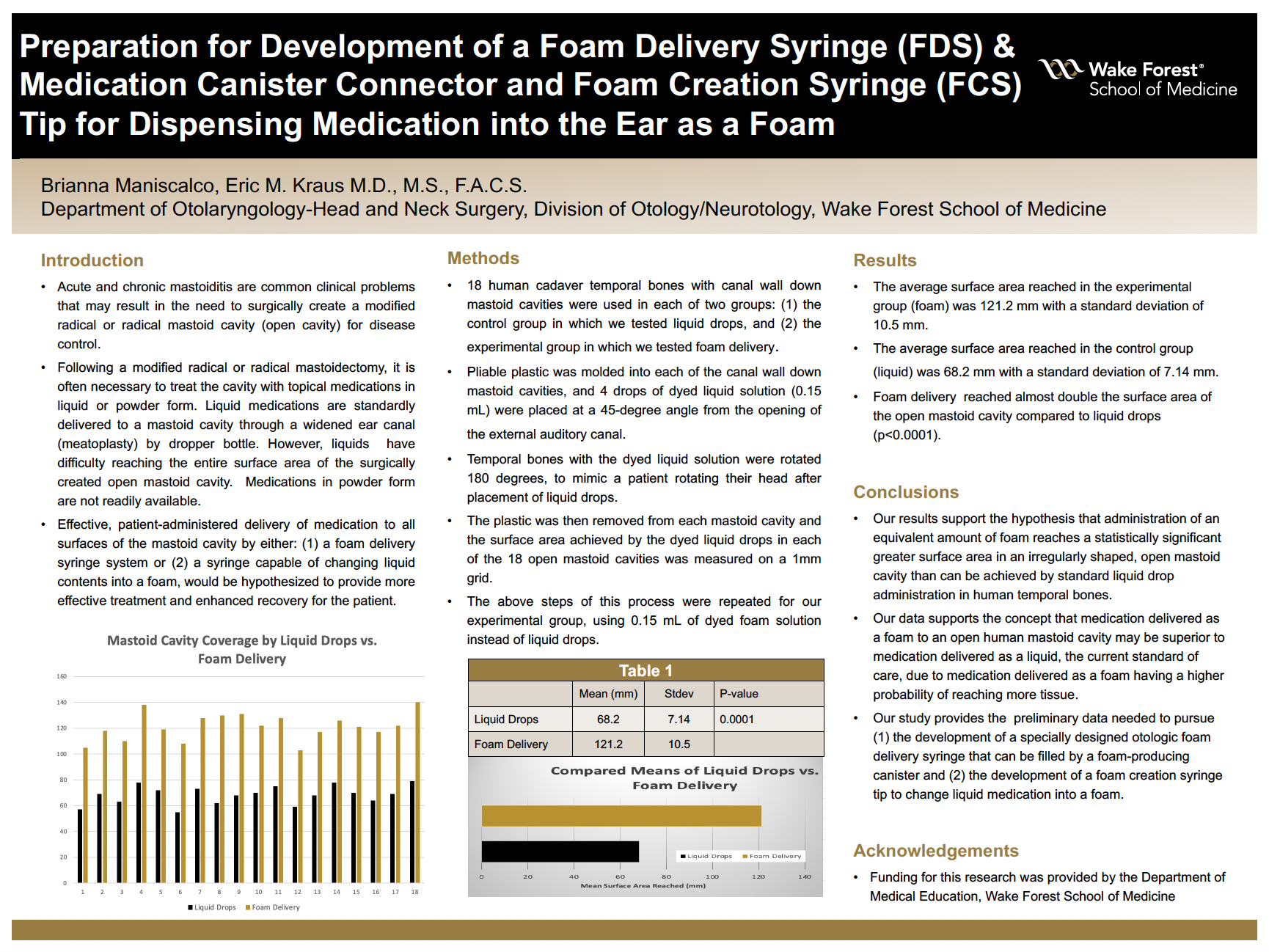 Background: Acute mastoiditis is a common clinical problem which follows acute suppurative otitis media with beta-hemolytic streptococcus being the most causal organism.  Treatment options include systemic antibiotics and topical otic drops through a tympanic membrane perforation or tympanostomy tube. Recurrent infections within the ear canal and mastoid cavity can have catastro­­phic affects for th­­e patient, such as sensorineural and conductive hearing loss, facial paresis/paralysis, and intra-cranial complications. When current antibiotic medication that is used to treat acute and chronic suppurative otitis media and mastoiditis proves unsuccessful, or if patients develop acute neurologic complications, surgical treatment consisting of mastoidectomy is employed. Following a modified or radical mastoidectomy, liquid medications delivered to the mastoid cavity via the ear canal have difficulty reaching the entirety of the surface area of the surgically created mastoid cavity. Our foamer syringe prototype would be predicted to expand and facilitate the delivery of various medications to the cavity as a foam, and would be able to reach all the small spaces and irregular crevices in the mastoid cavity that are unreachable by conventional liquid medications.  Effective delivery of medication to all surfaces of the mastoid cavity and ear canal by foam should lead to enhanced treatment and more complete recovery for the patient.

Hypothesis: Administration of medication as a foam increases the reachable surface area of the mastoid cavity compared to liquid medication delivery.

Methods: In order to evaluate the total surface area reached by both a foam solution and liquid drops, we measured the volumes of 18 cadaver mastoid cavities from the ENT temporal bone lab at Wake Forest Baptist. All 18 temporal bones were used in each of our groups: the controlled group in which we tested liquid drops, and the experimental group in which we tested foam delivery. Pliable plastic was molded into each of the mastoid cavities, and 4 drops of dyed liquid solution (0.15 mL) were placed at a 45-degree angle from the opening of the external auditory ear canal. The temporal bones with the dyed liquid solution were rotated 180 degrees, to mimic a patient rotating their head after placement of liquid drops. The plastic was then removed from the mastoid cavity and the surface area that the dyed liquid drops reached in each of the 18 mastoid cavities was measured on a 1mm grid. The steps of this process were repeated for our experimental group, using 0.15 mL of dyed foam solution instead of liquid drops.

Conclusions: Our results support the hypothesis that administration of foam medication reaches a greater area of a mastoid cavity than the standard liquid drops. This has important indications for the use of foam medication in the treatment of mastoiditis to prevent recurrent infections and to achieve quicker recovery time for patients.