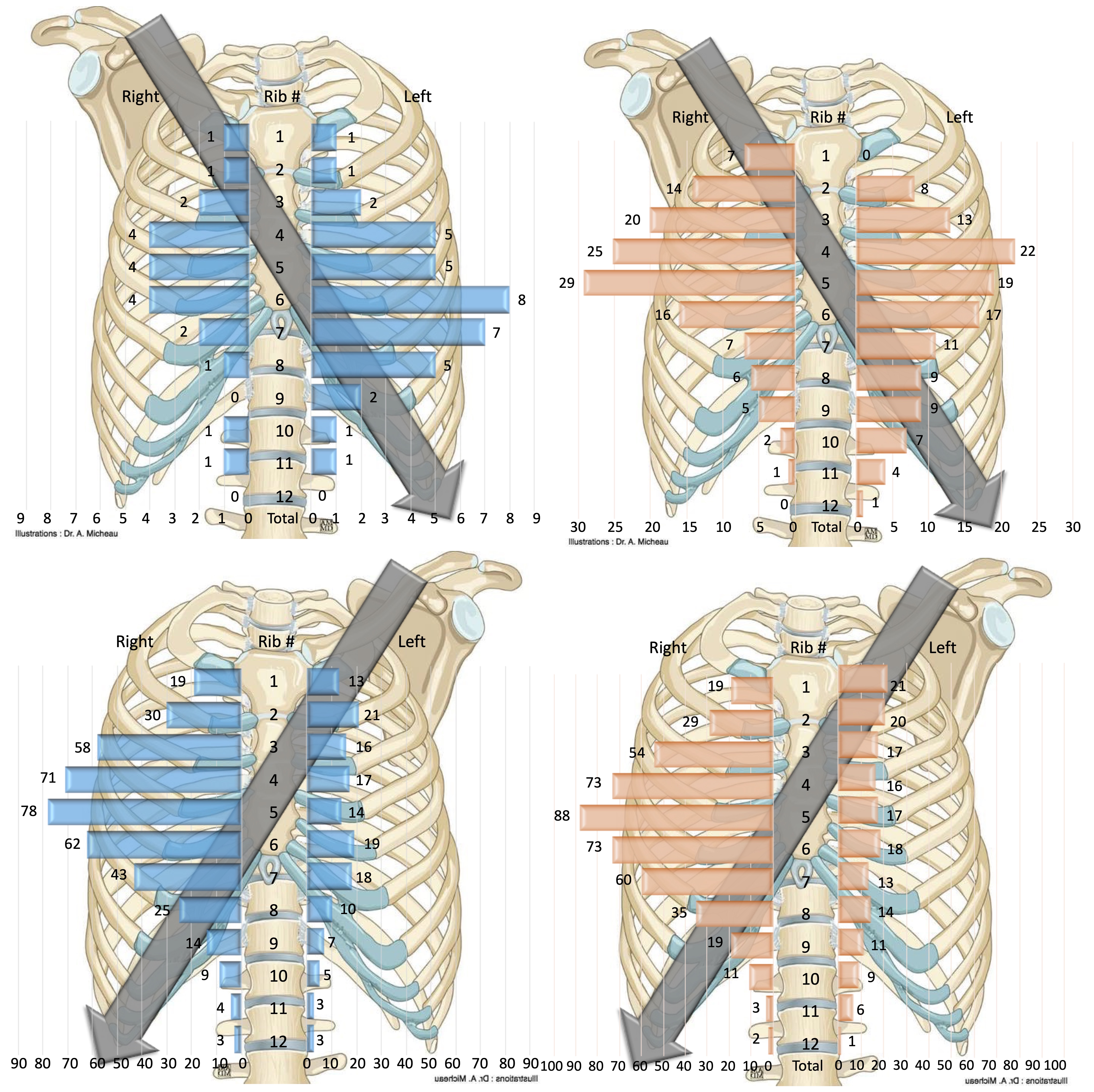 Background: Vehicle safety technology has improved significantly over the past several decades. Thanks to advances such as the 3-point seat belt system in combination with airbags, injuries and fatalities in motor vehicle crashes (MVC) have decreased. However, while overall risk of fatality in frontal collisions has been reduced, there exists a sex-specific disparity between males and females in MVC injury outcome. Male drivers are 3 times more likely to be involved in a moderate to serious MVC, leading to potential bias towards midsized adult males in the design of vehicle safety features. As a result, when accidents occur, females have 50% or higher odds of sustaining injury than males in comparable MVCs. The aim of this study is to determine male vs female differences in thoracic injury patterns in seriously injured MVC occupants.

Hypothesis: By analyzing occupant and crash characteristics, we hypothesize that females are more likely than males to sustain thoracic injury in comparable MVCs.

Results: In frontal MVCs, thoracic injury patterns differed based on sex, age, and seating location. On average, female occupants sustained thoracic injuries at a lower delta-V than males, with the average ± SD being 48.6 ± 19.7 km/hr for females versus 53.3 ± 22.7 km/hr for males. Younger female occupants (ages 12-25) had a higher incidence of thoracic skeletal fracture than males (50% vs 27% respectively). Occupants over 25 years old had more thoracic skeletal fractures (80% for ages 26-55; 98% for ages 56+) compared to younger occupants (39% for ages 12-25), but the difference between males and females for older frontal MVC occupants (25+) was unsubstantial. By nominal logistic fit, older age is predictive of soft tissue injury in addition to skeletal injury, with a p-value less than 0.001. In comparison, sex and delta-V were not predictive of injury type, with p-values of 0.46 and 0.36, respectively.

Conclusions: Females are more likely than males to sustain thoracic injury in comparable frontal MVCs producing at least one AIS 3+ injury or two AIS 2 injuries in separate body locations. Younger female occupants had a higher incidence of thoracic skeletal fracture than males, though the sex disparity did not continue past age 25. Age is the most reliable predictor for thoracic skeletal fracture, with 98% of occupants with a thoracic injury sustaining fracture past age 55. These results provide insight to vehicle safety manufacturers on what features may be altered to reduce sex and age-based disparities in MVC thoracic injury incidence, such as age or sex-based adjustment of seatbelt load limiters.

Source of mentor’s funding or other support that funded this research: Funded by National Highway Traffic Safety Administration (NHTSA) DTNH2217D00070.