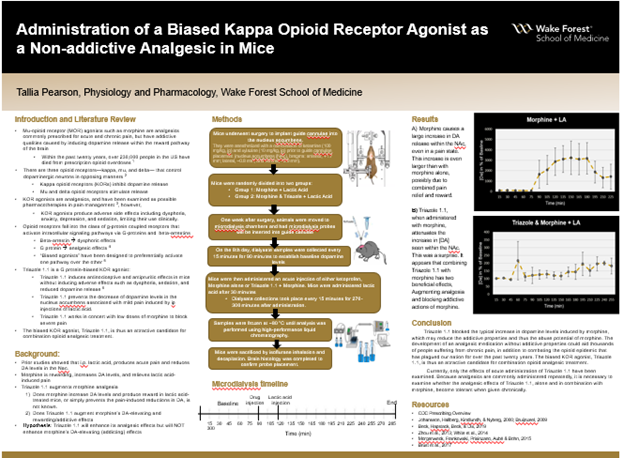 Poster Title: Administration of a biased kappa opioid receptor agonist as a non-addictive analgesic in mice

Background: Morphine activates the mu opioid receptor, which provides desired effects such as analgesia, but also leads to detrimental, undesired effects such as misuse, development of addiction, and overdose liability, primarily through its dopamine-elevating properties. Another class of opioid receptors, kappa opioid receptors (KORs), when activated provide analgesic effects without abuse potential, making the KOR a potential therapeutic target for non-addictive pain medications. However, most KOR agonists are aversive due to negative emotional effects, making them less attractive for clinical use. Recently, a new category of non-aversive, “biased” KOR agonists has been suggested for analgesia, but their potential for producing addiction on their own and possible interactions with mu agonists such as morphine have not been explored.

Methods: Dopamine levels in the nucleus accumbens were measured via microdialysis subsequent to administration of the biased kappa opioid receptor (KOR) agonist Triazole 1.1, alone and in combination with acute morphine, in mice experiencing pain induced by intraperitoneal administration of lactic acid.

Conclusions: These findings suggest future use of Triazole 1.1 in combination opioid analgesic treatment to work towards a method of analgesic medication without addictive properties. Such a treatment is particularly important as it could aid thousands of people suffering from chronic pain and work towards combatting the opioid epidemic.

Source of mentor’s funding or other support that funded this research: