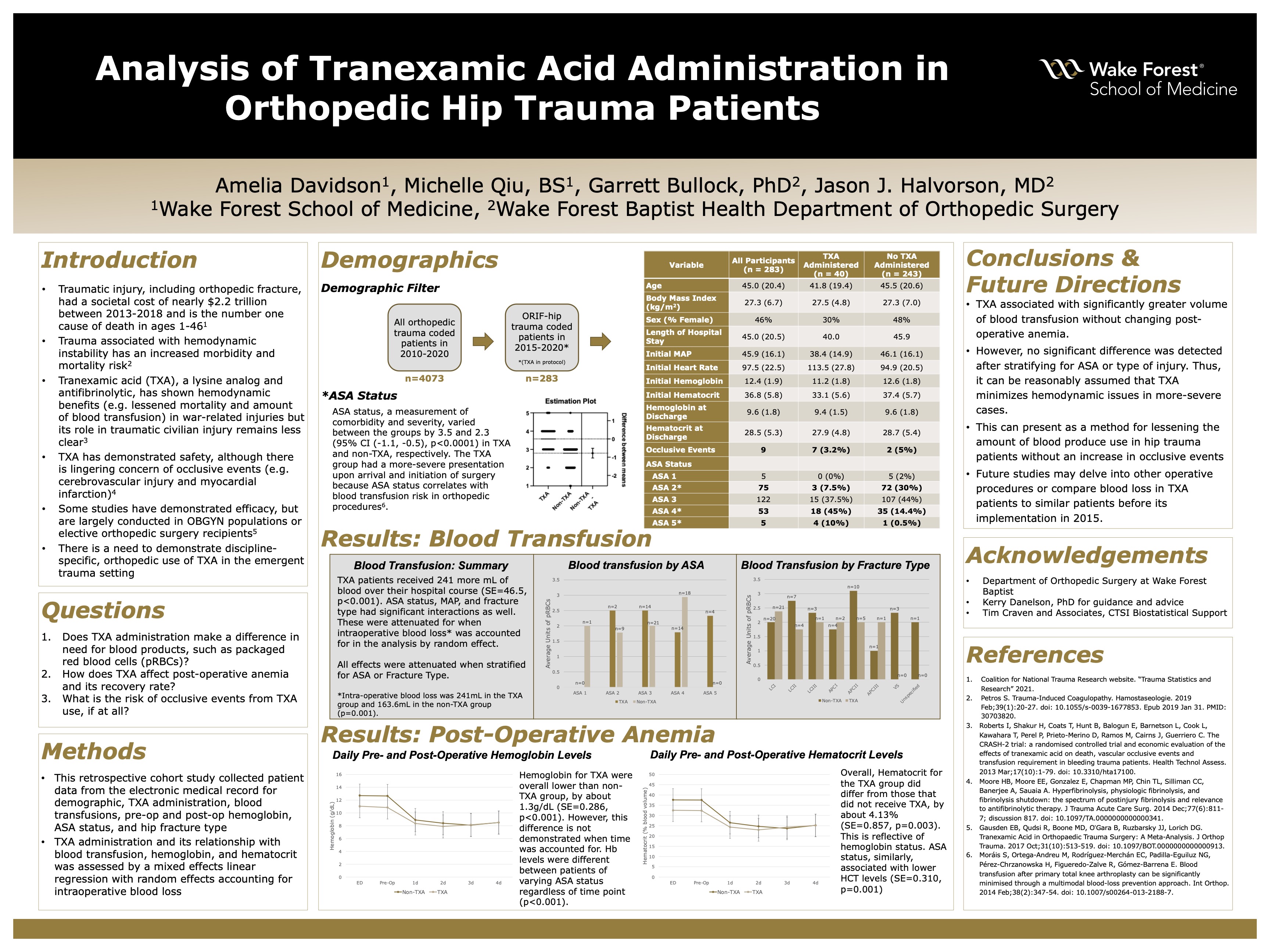 Background: Traumatic injury and its precipitating conditions, such as orthopedic fracture, have resulted in a societal loss of $2.2 trillion in the United States from 2013-2018 and are predicted to become the third leading cause of injury in 2022. Many of these conditions have increased morbidity and mortality when associated with unstable hemodynamic changes. Thus, an agent that addresses hemodynamic instability would pose great therapeutic advantage. Tranexamic acid (TXA), a synthetic version of lysine and antifibrinolytic, is one such possibility. It has been established that TXA decreases all-cause mortality within 4 weeks of injury in war-associated traumas, but it is unknown whether this is true for civilian trauma patients. The few studies that have been conducted in civilian populations focus predominantly on obstetric-gynecologic injuries and do not address other hemodynamic factors such as hemoglobin levels in post-operative anemia and show mixed evidence for TXA’s utility. Therefore, analysis of Orthopedic-specific trauma patients and their hospital stay are likely to provide valuable insight in elucidating TXA’s role in civilian trauma.

Methods: A retrospective cohort study was performed for orthopedic trauma patients that reported to Wake Forest Baptist Health for care between 2015 and 2019. Inclusion criteria consisted of: 1) coded for ORIF of the hip and 2) were Leveled trauma patients within the last 10 years. Variables of interest included demographic, TXA administration, blood transfusions, pre-op and post-op hemoglobin, ASA status, and hip fracture type. Data were reported as mean (standard deviation (SD)), median (quartile 1 or 2), or count (percentage). The relationship between TXA administration and blood transfusion was assessed by a mixed effects linear regression with random effects calculated for each patient with offset of intra-operative blood loss. A mixed effect linear regression with random effects by patient was also conducted for hematocrit levels over a four-day period. Confounders that were controlled included sex, age, ASA score, MAP, and an interaction between TXA and time. Sensitivity analyses were then utilized to understand the stability of the results and included: 1) only analyzing blood transfusion during ED evaluation and 2) excluding APA fracture types.

Conclusions: Patients who received TXA had significantly greater volume of blood transfusion without a subsequent change in post-operative anemia. However, no significant difference was detected after stratifying for ASA physical status or type of injury in each group. This was likely from a significantly higher ASA status, and thus, it can reasonably assumed that TXA helps minimize hemodynamic issues in more-severe cases. In patient care, TXA can lessen the amount of blood product use and cost in the setting of orthopedic trauma. Future studies may delve into other operative procedures or compare blood loss in TXA patients to similar patients before its implementation in 2015.

Source of mentor’s funding or other support that funded this research: None.