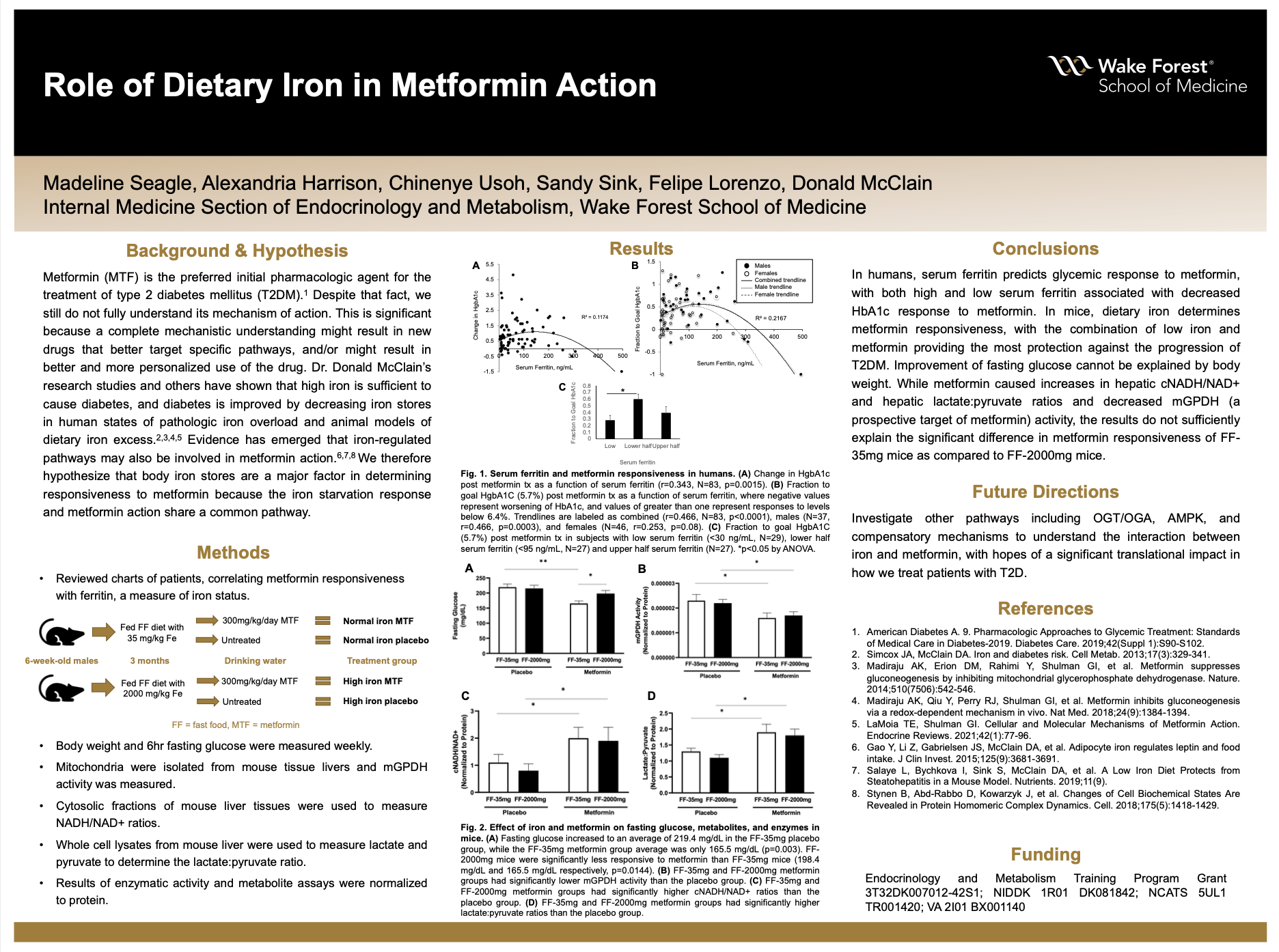 Background: Metformin is the preferred initial pharmacologic agent for the treatment of type 2 diabetes mellitus (T2DM). Despite that fact, we still do not fully understand its mechanism of action. This is significant because a complete mechanistic understanding might result in new drugs that better target specific pathways, and/or might result in better and more personalized use of the drug. Dr. Donald McClain’s research studies and others have shown that high iron is sufficient to cause diabetes, and diabetes is improved by decreasing iron stores in human states of pathologic iron overload and animal models of dietary iron excess. Evidence has emerged that iron-regulated pathways may also be involved in metformin action. In yeast, a novel pathway analysis identified the iron starvation response as the most significant target of metformin action. Iron is tightly coupled to fuel choice and oxidative capacity, and when iron is deficient, the organisms shift to non-oxidative metabolism, mirroring the hepatic response to metformin.

Hypothesis: Body iron stores are a major factor in determining responsiveness to metformin because the iron starvation response and metformin action share a common pathway.

Methods: Six-week-old C57 male mice were fed a “fast-food” (FF) diet containing either 35mg/kg or 2000mg/kg Fe for 3 months. Treatment group mice were then given 300mg/kg/day of metformin in drinking water and placebo group mice were given regular water for 1 month while remaining on diet. Body weight and 6hr fasting glucose were measured weekly. Mitochondria were isolated from mouse tissue livers and mGPDH activity was measured. The cytosolic fractions of mouse liver tissues were used to measure NADH/NAD+ ratios. Whole cell lysates from mouse liver tissues were used to measure lactate and pyruvate. The results from the two independent assays were then used to determine the lactate:pyruvate ratio. Results of enzymatic activity and metabolite assays were normalized to protein.

Results: While fasting glucose increased to an average of 219.4 mg/dL in the FF-35mg placebo group, FF-35mg metformin group average was only 165.5 mg/dL (p=0.003). Additionally, FF-2000mg mice were significantly less responsive to metformin than FF-35mg mice (198.4 mg/dL and 165.5 mg/dL respectively, p=0.0144). There was no significant difference of body weight between groups of iron or metformin treatment. Both FF-35mg and FF-2000mg metformin groups had significantly lower mGPDH activity, higher cNADH/NAD+ ratios, and higher lactate:pyruvate ratios as compared to their respective placebo groups. There was no significant effect of iron on mGPDH activity, cNADH/NAD+ ratios, or lactate:pyruvate ratios.

Conclusions: Dietary iron determines metformin responsiveness, with the combination of low iron and metformin providing the most protection against the progression of T2D. Improvement of fasting glucose cannot be explained by body weight. While metformin caused increases in hepatic cNADH/NAD+ and hepatic lactate:pyruvate ratios and decreased mGPDH (a prospective target of metformin) activity, the results do not sufficiently explain the significant difference in metformin responsiveness of FF-35mg mice as compared to FF-2000mg mice. To further elucidate the mechanisms behind the effect of iron on metformin response, we plan to investigate other pathways including OGT/OGA, AMPK, and compensatory mechanisms. These findings will help to understand the interaction between iron and metformin, with hopes of a significant translational impact on how we treat patients with T2DM.