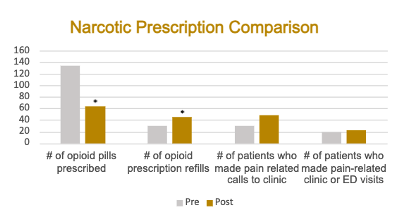 Background:The field of orthopaedic surgery has been a key contributor to the over-prescription of narcotic pain medications in the United States. Orthopaedic surgeons prescribe an estimated 7.7% of all opioid prescriptions in the United States, making them the third highest prescribers among physicians.  In North Carolina, the Strengthen Opioid Misuse Prevention Act of 2017 (STOP Act) went into effect on January 1, 2018, with the intention of increasing the oversight of opioid prescriptions. In 2017, the year prior to enactment of the law, there were 1,953 reported opioid deaths in North Carolina, of which 659 cases were attributed to prescription opioids (6.5 deaths per 100,000 persons). Few studies have been published to assess the efficacy of the new law in preventing opioid over-prescription and its effects on the healthcare system. The purpose of this study was to review the effects of the STOP Act on patients undergoing total knee arthroplasty, total hip arthroplasty and hip hemiarthroplasty.

Hypothesis: We hypothesized the new law would decrease the amount of opioids orthopedic surgeons prescribed with no additional increase in patients’ number of visits to the clinic or ED for pain control.

Methods:This study utilized a retrospective chart review of patients who underwent total knee arthroplasty, total hip arthroplasty, or hip hemiarthroplasty between January 1st and June 30th, 2017, before the enactment of the STOP Act, as well as from January 1st to June 30th, 2018, after the enactment of the STOP Act. Two hundred and eighty-nine patients were identified in the Pre-STOP Act group with 333 patients identified in the Post-STOP Act group. Variables of interest included demographics, amount of narcotic pain medications prescribed post-operatively, the number of calls and visits to the orthopedic clinic or emergency room due to post-operative pain, and the number of prescription refills for these patients. The data was analyzed using t-tests and Chi squared statistical analysis.

Conclusions:After the STOP Act, the average number of opioid pills prescribed after knee and hip arthroplasty decreased by more than half, making the law efficacious in its goal to reduce opioid prescriptions written. There was no statistically significant increase in patient calls to clinic or visits to the emergency room for narcotic refills, suggesting the STOP Act did not have a significant increased burden on the healthcare system overall. Our results are in line with similar studies on opioid misuse prevention laws in Florida, which is further evidence that these forms of legislation may be successful in reducing opioid prescriptions nationally.